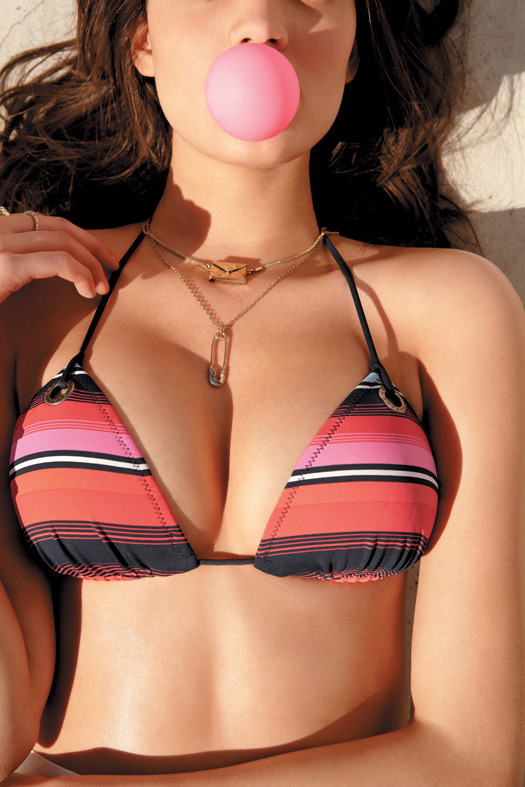 “But it’s just four days. And two of them are the weekend!”

“Not all of us get a summer break, college girl,” he said, smiling a little. “There are disadvantages to pursuing older men.”

She hated that, hated knowing it. It had been hard enough being away from him at school; their time together in these few months was precious, and thinking about spending it without him made her anxious, needy and fretful. Some part of her needed more than just his body, it needed the sense of trust they’d built, the certainty of his guiding hand. Without it, she could feel the old patterns creeping up: bad habits, sleepless nights, the dark fog and the worry of being unable to trust herself…

“But Andrea and Charlotte are going to be there!” She poked his leg with her toe. “Come on. All three of us in a beach house, running around in our bathing suits, drinking margaritas…” She worked her toe a little farther up his leg. “And you know how, um, flexible Andi gets when she’s drunk. That doesn’t tempt you?”

“You’re trying to persuade me to neglect my job by promising your friends’ impaired consent,” he said dryly.

“Go put on the bathing suit,” he said. “See if that affects my judgment.”

She came prancing back into the room in the stripy black and orange bikini, grinning, quite certain he wouldn’t be able to say no much longer. He leaned back on the couch and made a little stirring gesture with one finger, and she twirled for him, indulging herself in the thrill of it, the sure power her body could give her.

She turned again and lifted the mass of her hair to show him the knot. “I saved up my allowance,” she teased him, just before she felt his hand grip the cord behind her neck.

“Do you know what a halter is?” he said quietly, his lips close to her ear.

Her body had gone still but trembling, responding to his shift in tone, the feel of his starched cotton shirt on her bare back. “It’s–it’s for horses.”

“Yeah, well, that’s not what I’m wearing,” she said, squirming a little impatiently as she let her hair drop.

It worked. He took the back of her bikini bottoms in his other fist and swung her easily to one side, making her yelp as the fabric cinched up against her crotch. She stumbled and caught herself with her hands against the top of the couch back, knees half-bent just at the edge of the cushion, her hair falling around her face.

“Was it expensive?” he asked, running his thumb slowly down her spine and watching her skin prickle.

“So you wouldn’t want it to get stretched out–much less absolutely torn apart–by having me rip it off, wrap it around your head like a real halter, and use it to hold you in place while I fuck you out of your mind,” he said. “Would you.”

She bit her lip. There was absolutely no right answer.

He fished in his pocket and pulled something out. “I suppose it would be reparable, on a temporary basis.” The tiny sound of metal being pinched, then released. He slid his hand familiarly inside the left cup, pushing it out of the way and letting her soft breast spill out. “Do you think–if I tore it–we could fix it with this?”

The point of the safety pin dragged a little circle around her areola, and she gasped as she felt her skin contract against it–then held her breath, barely daring to breathe. He didn’t break her skin at all. He was far too careful. But she could feel the little scraping sharpness of it tracing around her, angled to make her prickle but not bleed.

Two circles, and then over the inner slope of her breast before he started drawing a thin line down her trembling skin to her belly. “You’re a sensitive beast,” he murmured, as goosebumps followed his hand. “Not one used to burdens. A soft one, and one prone to arching and mewling. A kitten? But kittens don’t take so well to the halter… and they certainly don’t take orders.” He brought his knee between her legs and pushed up, putting a little of her weight onto the shifting muscle of his thigh. “For instance, if I said: grind.”

“Y-yes,” she managed, and tried to move her hips without flexing her abdomen against the warning point of the pin. It was fucking hard. He was teaching her a lesson, she realized: she’d forced him to react with her body, and now he was forcing her body to react to the smallest possible point of pressure. She was swollen and throbbing, wet against the pressure as she started to soak through the flimsy scrap of fabric.

“This is what my good girl does,” he whispered to her, and the catch in his voice made it clear that he wasn’t as self-possessed as he wanted to sound. “Do you want to be my good girl even while you’re away?”

He pulled his knee away and tugged the fabric aside to expose her, and then the sharp little pin was there, pressing its flat against her trembling clit. She couldn’t contain a cry of something, fear and lust and sheer pounding abandon–

When he returned he had something in his hand, a soft silver cord that he fastened around her neck; she felt a small metal shape bump against her throat. “There are eight cards in here,” he said as he clasped it, “and each morning and each night you’re away, you’ll find a moment to yourself and draw one out. You’ll obey it, and you’ll think of me, and that’s how I’ll be with you: my hand will be your hand on your body, your mirror will be my eyes. You’ll like that, won’t you, my little animal, my little girl?”

Something in her relaxed, finally, and she sagged back against him. His hand. His eyes. His sharpness, keeping her aware of every nerve in her skin.

He let her keep the pin too.