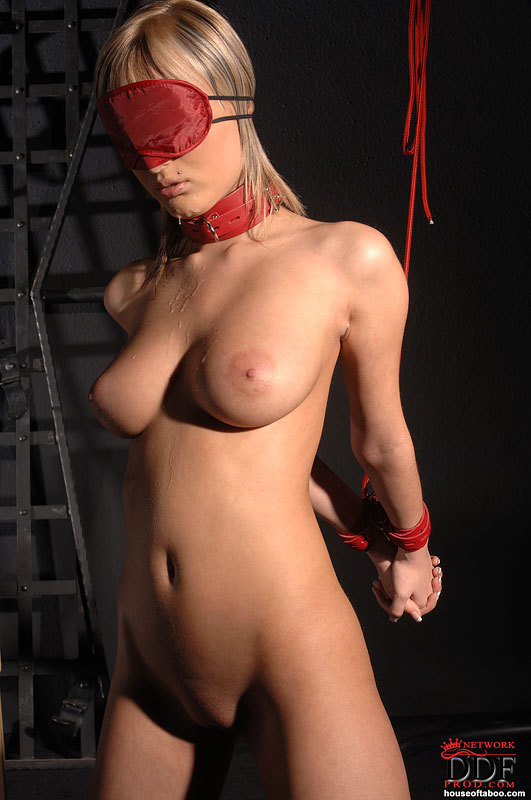 Wish I could think coherently, all I can seem to do is tremble excitedly.  The idea, the situation, everything about it …

Mmm… you’d know me. I’d be the one gripping your hair with one hand, and reaching down with the other, using my first and ring finger to spread your lips and pull up, exposing your clit so I could lightly tickle it with the fingernail of my middle finger, whispering about how messy you look, how wet you are, how I’d shove my fingers into your cunt except that it’s more fun to tease you, letting your g-spot ache, untouched.

Breath catching, body trembling as the fingers pull at her, teasing. Panting faster as she hears the whispers, feels the fingernail tickling.  Whimpering softly as she shakes in pleasure at the touch, at the humiliation, in the need to feel the fingers in her, touching her aches.  Her needs.

A sudden jerk on the rope attached to her cuffs, wrenching her shoulders and making her gasp and lean forward. There’s more than one chuckle in the room at that, and a woman’s voice murmurs something about getting that mouth down where it can be useful again. The fingers on her bare, smooth sex vanish as she’s slowly winched up into a strappado—and then, when she’s bent over far enough that her pussy pouts between her legs, they return. Or is it the same hand at all? This one likes to circle her clit and slide one thumb just inside her, teasing her slippery entrance but still not giving her the penetration she wants. Someone’s lacing fingers into her hair and tilting her head up, pushing her mouth down to be used properly, and the sounds coming out of her are nothing like a civilized language.

Gasping and trembling in pleasure and need, whimpering softly as her clit is circled but not touched, as she is teased but only barely penetrated, as she is lined up for perfect use, mouth down, opening hungrily, pussy on display to be taken, used, teased.  Body pulsing in need, squealing in pleasure and as she is left dangling without anything entering her mouth, gasping and wiggles, tries to express her need coherently and fails.

The squeal muffled, then, as her face is lowered to nestle in the warm velvet of a wet pussy. Does it belong to another slave or a Mistress? Does it really matter? The slippery tang of arousal fills her mouth and nose, even as the thumb in her cunt pushes deeper, sliding up against her g-spot with a firm pressure but frustrating slowness. A wooden switch begins tracing up her flank to her left breast, a tacit threat. Someone chuckles, “what are you waiting for?”