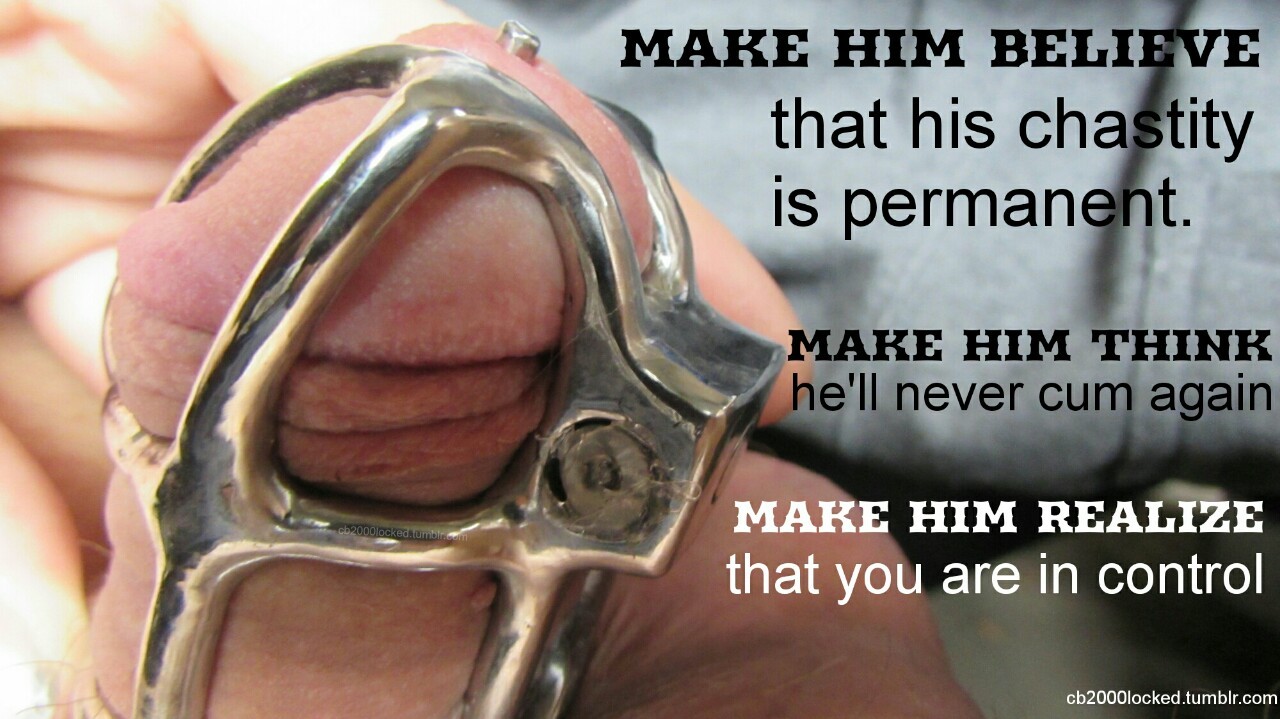 Make him believe that his chastity is permanent.

Make him realize that you are in control.

This is a really interesting one… I tried this recently and it was super hot. When we got our most recent metal cage it’s by far the most secure one we’ve got. He could still pull himself out with some effort but it’d still be stuck around his balls so it’s as permanent as it’ll get at this stage.

So anyway, after we’d tried it out we started a longer lock up about a week ago, and I did a long session where I teased him while he was tied (the new one is a solid ring so he put that on, as it’s hard to do, but it’s very easy to actually put the cock part on and lock it, so more and more I do that as it’s very hot for him when I do.)

Increasingly I’m taking pages out of his playbook. Reusing the things I LOVE when he’s in control and domming me. In this case it was telling him what I wanted him to say, even though it wasn’t what he wanted.

Instead I whispered in his ear, ‘Tell me to lock you back up’.
He didn’t do it at first, so I stopped stroking him to make my point.

He did, and I felt his cock throbbing and amazingly it got even harder. I edged him again as a reward and after a few minutes…

Again he did, and god it was so hot to hear him!

Again a pause, and he said it.

Then I let go over his cock, and gave him a kiss. And rolled back and scrolled through tumblr, as I waited for his cock to go back down. It took some time lol I shushed him when he said anything.

Then I straddled his legs, lubed his cock and quickly slid the cage part on, and I put the padlock through the hole, but didn’t shut it yet.

And this was the most intense bit. I looked into his eyes, and said, ‘Tell me again, tell me you want me to lock up your little cock and never let it out again.’

Now look, obviously I don’t want him in the cage permanently!, and neither does he. But it was an amazing mixture of fantasy and roleplay and reality. And I refused to discuss it, lol, I wouldn’t confirm I was just kidding. And just to really fuck with him the next night, I didn’t let him out, I just had him fuck me with the strap on without any release for him at all.

So yes, I love this caption! Learn to mess with him, he’ll adore it, and I think you will too.

Damn this is hot!!